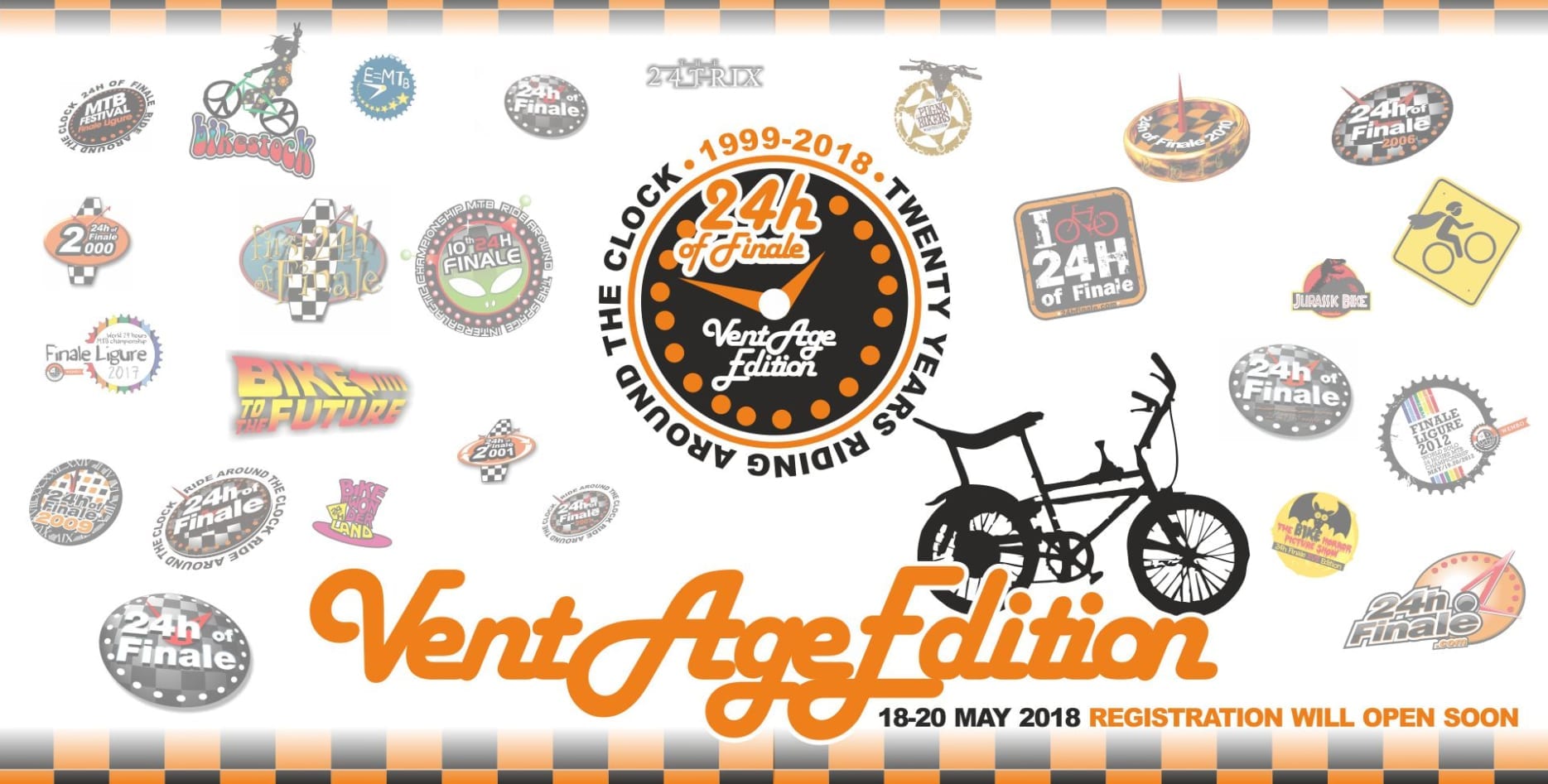 15 Dec VENTAGE EDITION, THE TWENTIETH ANNIVERSARY OF THE 24H OF FINALE

The twentieth edition of the 24 hour mountain bike event of Finale Ligure will take place between the 18th and the 20th of May 2018: registration will be open from mid-January!

Just like a clock whose hands keep ticking and never stop marking the passing of time, since 1999 to the beat of 24-hour- long intervals, the most popular and attended 24h mountain bike event in the world will make it to the 2018 edition – its twentieth.

Everything has been tried in order to cheat the passing of time, jumping back and forward aboard the DeLorean, ending up in the Jurassic Period amongst dinosaurs, or in the middle of the Wild West, with bandits and saloons. After that, we tried following the White Rabbit or swallowing strange, red and blue pills offered by Morpheus. At some point the challenge has been that of facing horrible monsters or running into absurd hallucinations in a proper “Bikestock” atmosphere.

We even found ourselves in the middle of a couple of World Championships…are we awake or still dreaming?… The results, however, has always been the same, and it falls every year at intervals as regular as only a Swiss clock mechanism could do: from the Manie area we will start and to the Manie area we will go back, always with the biggest grin on our face!

During the past 20 years many things have changed. One above all: the bikes. And perhaps the guys of the crew have got a few more grey hairs, but the energy and enthusiasm for making you enjoy your time here remained unchanged.

Many have grown older with the 24h. It is an event that has written some memorable pages in the history of mountain-biking, and, as a matter of fact it represents a real leitmotif in the development of the bond between this territory and mountain biking.

With the launch of the Toboga Stadium – and associated party – as a great way of bringing together all enthusiasts, which took place a couple of years ago and that – it is fair to say – is already the envy of the world, it is now time to take another step forward in the spirit of the 24h of Finale.

Something that actually means a step backward, a sort of “back to the origins”.

The 24h of Finale goes back to be one single event for solo and team riders, racers and enthusiasts alike, over the same race course and at the same time. Same start and finish line, double fun! …

and plenty of emotions to share with all participants.

“With this big change, we are aiming at strengthening the idea we have and our interpretation of this event and, in general, of 24h racing. The movement is driven by an immense desire to live moments of pure fun in the company of friends.” Riccardo Negro, Blue Bike&#39;s president, tells us.

Registration to the twentieth edition of the 24H of Finale will open after the Festive season, in mid-January 2018: during the holidays you&#39;ll have plenty of time to think about how to arrange everything in order to take part in this VentAge edition. More details will also be revealed at a

We are waiting for you!