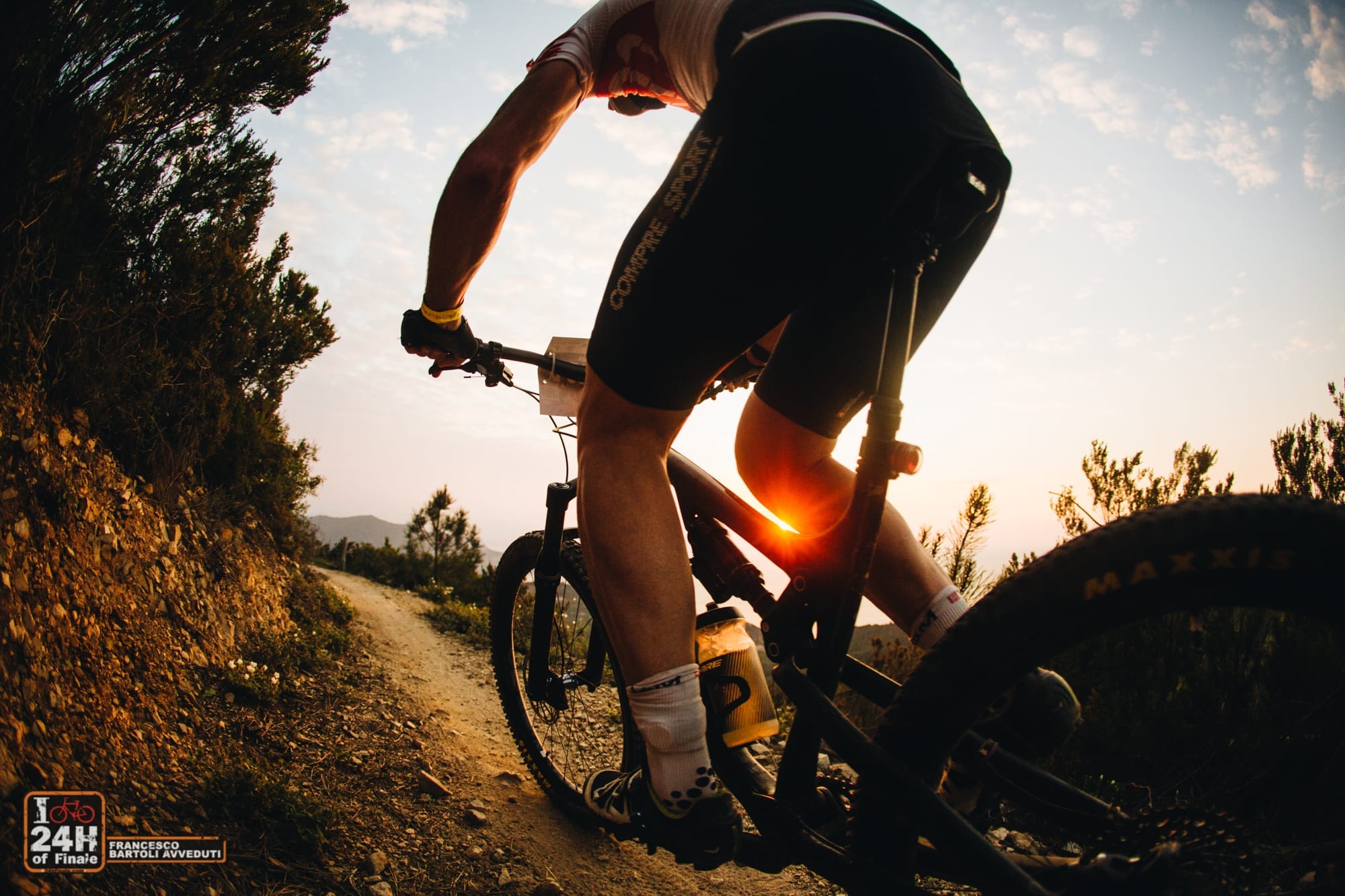 15 Dec THE 24H OF FINALE TWENTIETH ANNIVERSARY, THE EVENT AND THE HISTORY

Solo rider Kai Saaler and Marchisio Team fly over the 24H of Finale loop. Single-speed rider Ausilia Vistarini is back on the top spot of women’s podium while MTB Oppenau take the win in women’s teams.

A real mix of emotions charged the 24H of Finale twentieth edition, along with the launch of the new VoltaAge event, a 6H race dedicated to pedal-assisted bikes.

On Friday 18 May, still in the early hours of the morning, Altopiano delle Manie was getting crowded with thousands of people – riders, teammates and of course the organizing crew – eager to enjoy again the bustling excitement that is all over Finale and in everything the region has on offer when it comes to mountain-biking.

Until the sudden and tragic death of a friend dramatically changed the whole atmosphere of the event, usually so colourful and extravagant: the relaxed vibe of the 24H of Finale turned into silence. All events on schedule for the day got suspended. Sharing the sorrow, coming together in a collective, virtual embrace perhaps helped souls heal and in the morning, in the light and sunshine of a new day, it made it possible to go back to the event, focussing on sport and on all values it is ruled by.

The twentieth edition of the 24H of Finale and Saturday’s schedule resumed, with several side events and with Solo and Team2 racers setting off from the Manie start, followed by Team 4/8/12, raring to go in Piazza di Spagna, Finalmarina.

Those who were heading for victory made their stand clear right away, imposing a serious pace that gradually skimmed any potential pursuer off.

Only Kai Saaler, winner of the Solo category, had a slow start as three flats pushed him back to the 15th position. Lap after lap, Kai moved up in the ranking and fought his way to the top of the most prestigious category, with 25 laps and a total of 300 km.

Mauro Ranieri follows him in second position with 24 laps, while Oliver Best is third with a total of 21 laps.

In teams, 8-rider Marchisio Team takes the win with a final racing distance of 420 km over 36 laps. A true team effort led the crew to victory. During the night, the most difficult time in a 24H race, the guys pushed hard and managed to increase their leading margin. Haaans’ four men secure themselves with the second position in the category (34 laps), while 8-rider Rock Nationals put together 33 laps and take the third spot.

In the women, beloved single-speed rider Ausilia Vistarini takes the win in the solo category with 18 laps and 216 km, with a 1-lap margin to second placed Eva Fuenfgeld a 2-lap lead over Linda Fabris, third.

“Our 24H event has helped change the way people ride bikes – in Finale’s area and beyond – thanks to an attitude that is connected more with passion than with competition ” Lorenzo Carlini, 24H of Finale co-founder, states.

Beyond the results achieved by athletes and enthusiasts, the greatest achievement of the 24H of Finale is that over the years it has been able to keep alive the unique nature of the event, going beyond the classic competitive character of mountain-biking.

ALL THE RESULTS HERE